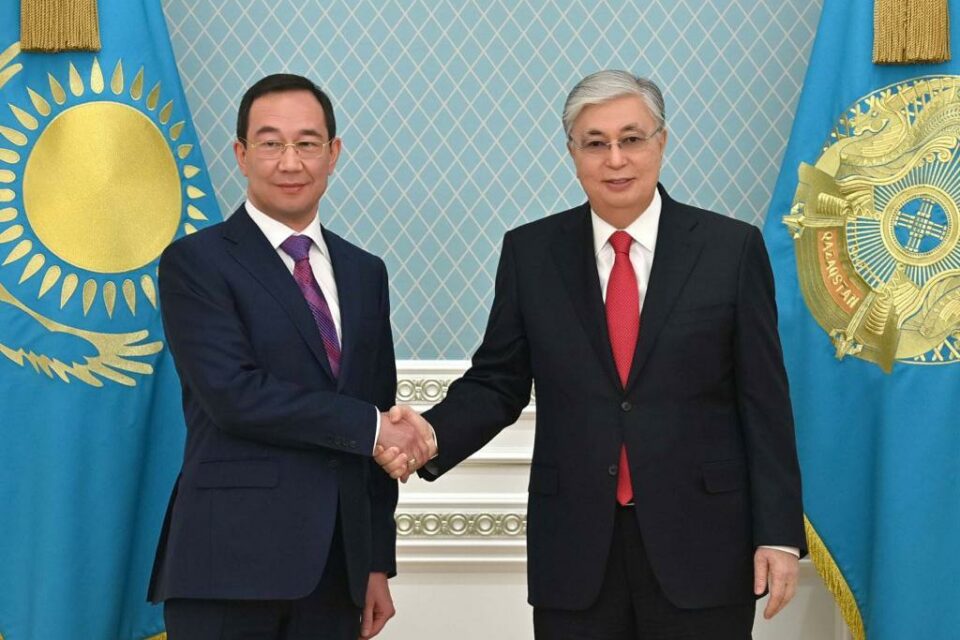 Yakutia and Kazakhstan have outlined priority areas of cooperation

Prospects for the development of interregional cooperation, priority areas of cooperation were discussed by the head of Yakutia Aisen Nikolaev and the President of Kazakhstan Kassym-Jomart Tokayev.

The head of Yakutia is on a business visit to Kakhakhstan. The President of Kazakhstan cordially welcomed Aysen Nikolaev. He noted that considerable attention is being paid to the development of relations between the Republic of Kazakhstan and the Russian Federation today and recalled that the XVIII Forum of interregional Cooperation between Russia and Kazakhstan with the participation of the presidents of the two states was held in Orenburg at the end of last year.

Kassym-Jomart Tokayev also noted the growth of trade between Kazakhstan and Yakutia, and the potential here is far from exhausted. He stressed that the program of the visit of the Yakut delegation included meetings with the heads of ministries and departments, as well as with the Prime Minister of Kazakhstan. Specific projects will be discussed to give impetus to the development of cooperation.

Kazakhstan and Yakutia have a lot of historical ties, Tokayev noted, highlighting the name of the outstanding son of the Yakut people Maxim Ammosov. In the 1930s, he worked as a secretary of the regional committees of the CPSU (b) of West Kazakhstan, Karaganda and North Kazakhstan regions.

Kassym-Jomart Tokayev expressed the opinion that economic and humanitarian cooperation between Kazakhstan and Yakutia should develop simultaneously in a number of strategically important areas. Among the priorities he highlighted:

“Today, relations between Russia and Kazakhstan are of a strategic allied nature, they are distinguished by a high level of trust between the leaders of our countries. Yakutia, as an integral part of the Russian Federation, is ready to fully contribute to the expansion of trade, economic, humanitarian and interregional cooperation,” the head of Yakutia Aisen Nikolaev said at the meeting.

The Head of the Republic stressed that cooperation between Yakutia and Kazakhstan in the field of IT and creative industries is developing, contacts are being established between relevant organizations and enterprises. This is confirmed by joint projects, screenings of Yakut cinema and the participation of Yakut cinematographers in festivals that take place in Kazakhstan.

Humanitarian partnership is also actively developing, in particular, in the field of education, science and sports. The Northeastern Federal University named after M.K. Ammosov has close ties with universities in Kazakhstan, exchange programs are being implemented. The mas-wrestling federation is registered in the country, which actively promotes the Yakut national sport. Kazakhstan has also been an active and permanent participant in the international sports games “Children of Asia” since their establishment in 1996. Aisen Nikolaev invited young athletes from Kazakhstan to take part in these major competitions in 2024, when the games will be held in Yakutsk.

All this allows us to count on the further development and strengthening of bilateral relations both in the field of foreign trade and investment, and in the humanitarian sphere, the participants of the meeting noted.